I absolutely LOVE this quote! It was shared with me the other day, and I've been thinking about it ever since. And about how the different things I've been doing - because I'm interested in them, have, Yes -  been leading to interesting things!!

So my question to you is - What interesting things are You doing RIGHT NOW? And if you feel that you aren't. What would you LIKE to do?Remember - these don't have to be MASSIVE. SMALL is GOOD! Would love to hear your thoughts on this - so please leave a comment below...!

Reduce Month - The joy of re-purposing!

I've re-purposed the 'Portishead' pin badge! I made it up as I went along. And I like it! 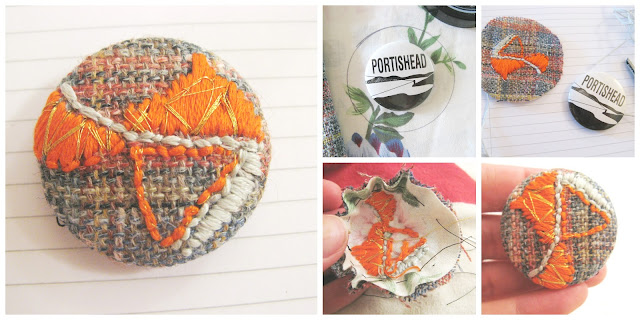 I didn't really plan the design. I used what I had to hand - including some tweed fabric that came all the way from my friend Jaimie in Scotland, as well as the flower fabric which was from my fella's Mum in Derby....Already it has a new story! ;-)

Then I played and some shapes appeared....I found it really relaxing.

When I turned it over to start putting it together, I noticed what looked like Nefertiti!! Can you see her?

It's now pinned to one of my jackets ready for it's first outing.
Posted by Morwhenna - Creative Adventurer at Thursday, August 15, 2013 No comments:

I've been really busy the past week running the Connect to Nature course - with my good friend Jaimie. I'm loving it! Ah it is so wonderful seeing everyone who's taking part creating and sharing. ;-)

So that has meant that I have some catching up to do on my 'reducing' and here it is. Some items I just don't know what to do with. Please put forward any suggestions!

It would be very easy just to chuck it all in the bin and be done with it - but can I re-purpose anything? Or is there someone who would benefit/like what I have? Can I sell any of it?

Each item here, whatever it's size, has been made using resources. Trees, ink, oil, care, time...to name just a few and I don't want them to just end up in landfill without having a darn good think/come up with alternative uses - first.

These items have been hidden away in a few of my storage boxes that I use for keeping sewing/art and anything else.. 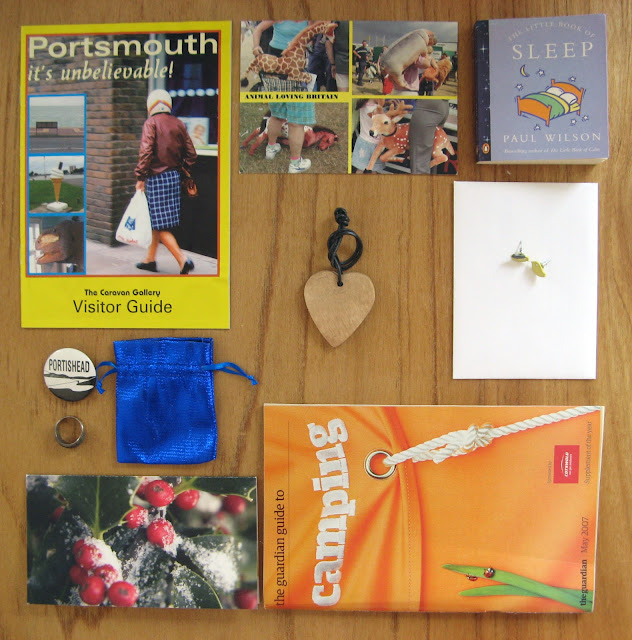 In the white envelope I discovered I had £30 worth of Debenhams vouchers...which I'd been given for my Birthday by my parents - a few years a go I think - as they gave me a box of Cornish pasties last year! That has to have been one of my fav. presents ever!!

And in the card with the berries is £30 worth of garden vouchers. Again from my parents some Christmases ago.  I think I hadn't spent them as I was saving them for something I really wanted - and so put them somewhere safe...!  So now I will spend these (that's an easy one! - although not on clothes ...as I'm still running my Love What You Wear Project!

There is also a camping guide from 2007 - anyone want that? recycle that?
And a programme and postcard from the very funny 'Caravan Gallery'. I think I know what I'll do with them! I'll send the post card to a friend and make cards from the programme...

Then there's the earings. 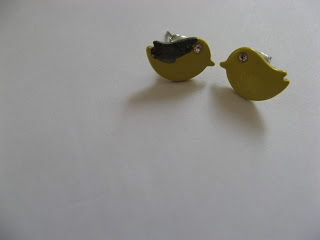 I LOVED these little bird earings when I was given them one Christmas and wore them all the time. But the enamel started to come off - and I haven't known what to do with them So they have sat in a box.. Any ideas? 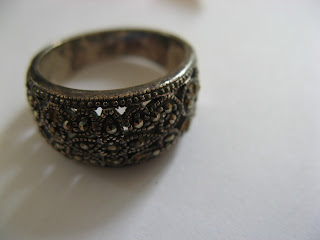 I bought this silver marquisette ring from the Swansea Antiques Centre many years ago (no idea how many!) I Loved it, wore it lots, but the little marquisette stones started to fall away. It is a replica rather than a proper 'antique.' Question is - Can I get it made into something else?

I have decided what to do with this wooden heart though. This was a lovely gift from one of the ladies at Neal's Yard when I went to the conference a few years back. This was made by someone  - somewhere - so I've decided to decorate it for a niece and send it to her as a gift.

Ah yes The Little Book of Sleep and a pin badge for Portishead...

What to do with old DVDs?

I have chosen three to part with - so far!

I had the Austin Powers box set one Christmas many years ago and don't think I've actually watched the films more than once. So it is as good as new. Actually looking at it makes me feel a bit sad. That was a gift given with love and yet I don't feel I really appreciated it by actually watching it. I wonder how many other things I have like that?

South Pacific - a charity shop purchase - I do love musicals - but this one wasn't for me! I think I'd rather remember the memories of the songs rather than some of the questionable comments in the film! Well, I guess it was made in 1958...;-0

I bought the Hideous Kinky film a few months ago after finding it in a charity shop. I'm going to Morocco later this year (hurrah!!) and it's a film I've wanted to watch for years! It wasn't quite what I expected. I did enjoy parts of it but I know it isn't a film I'll watch again...so to a new home it will go...

The South Pacific and Hideous Kinky films came from a charity shop in Yatton, Bristol.  I used to visit that area every two weeks for three months. I was having sessions with an empowerment coach and I would often pop to the charity shops after each session as a treat and a way to process all the stuff we'd talked about before driving home. ;-)

I would like to sell these and put the money towards my Moroccan adventure!

So any offers or suggestions of what might be best - I'd like to hear! I've considered ebay and have started looking at those online 'sell your stuff' sites - so if there are any recommendations which ones are best - Let me know! Thank you ;-) x

I'd like them to be appreciated in new homes ;-)

I don't remember where this came from or exactly how long I've had it - but I do know where it's going! I have a friend who will love this! So it's going to a new home.

Posted by Morwhenna - Creative Adventurer at Friday, August 02, 2013 No comments:

August - A month to REDUCE!

I've been talking and thinking about having a good clear out for ages but just haven't done it.

I am a hoarder.

After a very timely conversation the other week I heard about the 100 Things Challenge.  I'm not about to get rid of everything down to only 100 possessions in a month (maybe in a year?!) Instead I am committing to getting rid of one item a day for the whole of August.

A tube of dried up gouache

I bought this in 1993 when I had just left 6th form and was about to start a year long Art and Design Foundation course at Swansea Institute before going to Uni. I remember getting the materials list and being really excited about starting the course.

Since then it's lived in Swansea, moved to Portsmouth in 1994 where it went to uni, staying and living for 13 years before moving to Bristol in 2007.

And in all those years since not used or loved. Just sitting waiting. No wonder it had gone hard.   ;-(