[UK Islands Project] A Letter from the Pope

Yes, you read that correctly. I have a letter from the Pope (and a gift!)

Well, OK it wasn’t sent from him exactly but it came from the Vatican and his office!

Hang on a minute I bet you're thinking – How, why?

'zzzuuuup' rewind to December 2016 (just after Christmas and before New Year) and I’m leafing through a copy of Country Walking magazine and come across a small article about Bardsey Island. I knew that Bardsey is also known as the 'Island of 20,000 saints', but what I didn’t know was that during medieval times when pilgrimages were all the rage (have you heard – they are becoming popular again) three visits to Bardsey Island was equal to one pilgrimage to Rome and any pilgrims that went to Bardsey were blessed by the Popes of Rome!

Right then, I thought. Best write to the Pope then seeing as I’m visiting Bardsey in August.

Quick as you like I penned a letter (and added a little drawing of a wren) to His Holiness Pope Francis – and posted it off to the Vatican (before I changed my mind).

I had a reply!

Tell you what, I was so excited!

[side note: This is beside the fact that I’m not a Roman Catholic or really of any particular religious persuasion. I did note this in my letter and had checked beforehand that anyone at all can write to the Pope. I didn’t wish to cause any offence. I made sure I addressed it properly too]

What was inside? There was a lump of something!

I was flabergasted when I opened the envelope and discovered its contents... 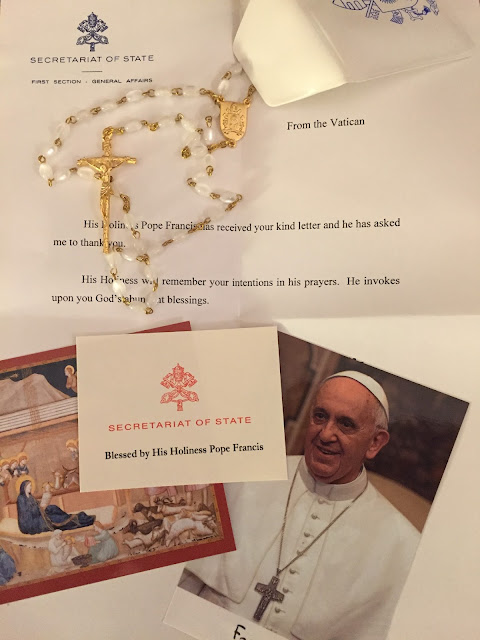 
I really do feel rather chuffed.

I'll take these with me to Bardsey. I’m only planning one trip though not three (don’t tell the Pope!) *big smile*

Have you ever written to someone that caused you great excitement when you received a reply?

Or who would you write to? This could be anyone – someone who inspires you, someone you wish to thank or someone you just want to say hello to...

Receiving a real to goodness letter in the post is so lovely and can create skips of happiness!

Now I’m currently trying to think of an Island related reason to write to the Queen, as I’ve never written to her before….
Posted by Morwhenna - Creative Adventurer at Monday, March 20, 2017 No comments:

[UK Islands Project] Off to the southernmost settlement of the UK

Blimey, I'm off to my third Island next week! Not sure about you but time seems to be wizzing by at the moment and lots of things are happening all around and about. Have you noticed the evenings drawing out, the bird song and the abundance of new shoots on plants and trees? And the daffodils! Ah the lovely nodding daffodils (Happy St. David's and St. Pirian's Day by the way!)

I'm flying from Land's End airport and will be returning by boat. I've been in touch with the skipper of 'The Spirit of St.Agnes' and they will be waiting for me at the harbour once I land on St. Mary's to take me across to the island.

I have no idea how many others will be on the boat with me as I'm going 'off-peak,'  there might not be very many - there is only one boat a day.

This is my first trip to these islands and after looking at each island that make up The Isles of Scilly, I decided to focus on one this trip as I'm only going for a few days. I've learnt already from my two previous Island Hops that I need plenty of time just to 'sit and stare' so hoping to get the balance right on this island adventure!!

I chose St.Agnes as it is the Southernmost settlement of the UK and so by default it has the southernmost Post office and southernmost Pub! The Turk's Head (I hope it's open!!) It also has lots of interesting creatives and stories to discover. I'm hoping I'll find what the 'Spirit of St.Agnes' is...

I'm also keen to find out why folks from St.Agnes have the nickname (old) of Turks. Any ideas?

As with the other islands visited so far (Portland and Sheppey - still so much to write and share about these trips) I'll be creating one-off art postcards from this island hop - If you'd like a special postcard created for you and posted from this Southernmost part of the UK - sign up here!

This will be the first island I'm visiting for this project that doesn't have a road to it, so the weather is much more important a factor than my two previous trips...

Have you ever visited The Isles of Scilly? If you have - tell me about your adventures there!


My Peregrination around The Isle of Sheppey,* Island No. 2 of my UK Islands Project, began with a visit to Tate Britain.

After discovering that the famous British artist J W M Turner (1775 - 1851), visited and painted on the Isle of Sheppey, I wanted to try to ‘see what he saw’ and went in search of any paintings he had created whilst he'd been there.

This led me to discover that Tate Britain, who holds the World's largest collection of Turner’s work, had some 300 of his sketchbooks – some of which (well, three) contained sketches of Sheerness and views from The Isle of Sheppey. Much excitement followed as I found that I could make an appointment (free) with the Prints and Drawing room at the gallery to view these sketchbooks.

The viewing of any artworks not currently on display is open to anyone. All you need to do is request an appointment detailing what works you want to see, and when you arrive (it’s in a secure, temperature controlled room near the Clore Gallery) show some photo ID and a very helpful member of the team there will show you to a viewing desk and depending on the artworks, show them to you.

Alice was the member of staff who helped me and who unwrapped the sketchbooks I’d come to view. Even though I wasn’t permitted to handle or photograph them (they are actually available to view online) it was exciting to see the actual books that Turner had used, to see his lines and tone and to get a feel of the paper and kinds of books he'd taken on his many travels (Turner loved to travel). Turner’s sketches were very light, fluid and quick. He was able to express what he saw in just a few lines. Inspiring.

Some sketches were nothing more than a single line, others contained so much movement and drama that they seemed to leap out of the page. I felt very lucky to be sitting there looking at these ‘behind the scenes’ works that were the starting points for Tuner's exquisite large scale paintings. (I really liked Turner's sepia sketches and as a result have ordered some sepia ink for my own drawing pen).

I had hoped to be able to get an idea of where he’d been standing in Sheerness so that when I went I could stand ‘roughly’ in the same position. Unfortunately, Turner hadn’t included any GPS coordinates on any of his sketches so it was very difficult to tell exact spots as there were no real landmarks. They were all pretty much looking out to sea from Sheerness.

Well, I thought, that still gives me a rough idea... 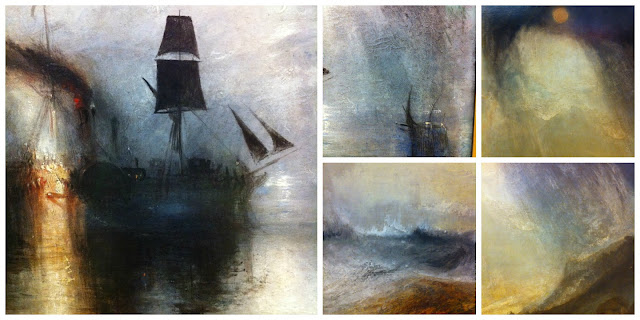 Once my allotted time in the Drawing and Prints room was up, I went for a wander around the Clore Gallery which has a permanent exhibition of Turner’s work and it struck me how I was drawn to certain parts of paintings.  Prior to this research I can’t say I’d ever really been a big fan of Turner’s work – but looking at it now and seeing the light, colour and texture I developed a new sense of appreciation.

Looking at the overall painting was one thing, and then a totally different experience when I focused in on parts that really caught my eye. (Getting up as close as I could with out setting of any alarms. I did that once, set off alarms in an Art Gallery in New York. Oops) These were the parts I ended up taking the most photos of (you are permitted to take pictures, no flash, in the Clore Gallery of Turner’s work. Makes a nice change not having to try and avoid the gallery guards!)

One of Turner's most famous paintings - The Fighting Temeraire, has a clear link to Sheerness and The Isle of Sheppey. This painting is actually held at The National Gallery, so wasn't one I saw on this trip.

The 98-gun ship 'Temeraire' played a distinguished role in Nelson's victory at the Battle of Trafalgar in 1805. The ship remained in service until 1838 when she was decommissioned and towed from Sheerness to Rotherhithe to be broken up. You can view that painting and an interesting film about it here - The Fighting Temeraire

What do you think of Turner's work?

Next stop….The Isle of Sheppey! 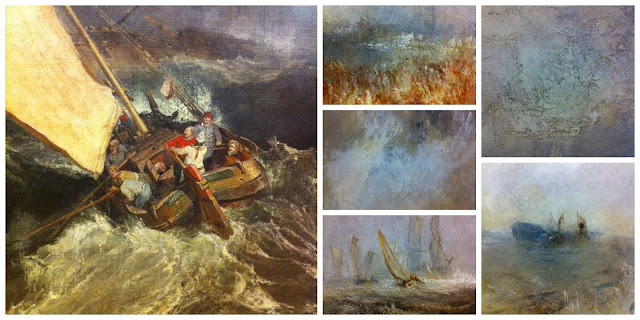 *The artist William Hogarth wrote about his 'Five day Peregrination Around The Isle of Sheppey', basically a 'lads night out' in 1732. It makes for fun reading!

To request to view artwork at Tate Britain: Prints and Drawing Room

Image Credits: Turners Sketchbook - Tate Britain
All other images are authors own.
Posted by Morwhenna - Creative Adventurer at Friday, March 03, 2017 No comments: