Very excited that Launch Day for my NEW collection inspired by the Isle of Portland has finally arrived!
To view the full collection fly on over to my Folksy shop here: https://folksy.com/shops/Morwhenna
THANK YOU!
Morwhenna xx
Posted by Morwhenna - Creative Adventurer at Thursday, October 15, 2020 No comments:

Launching - Here's what to expect 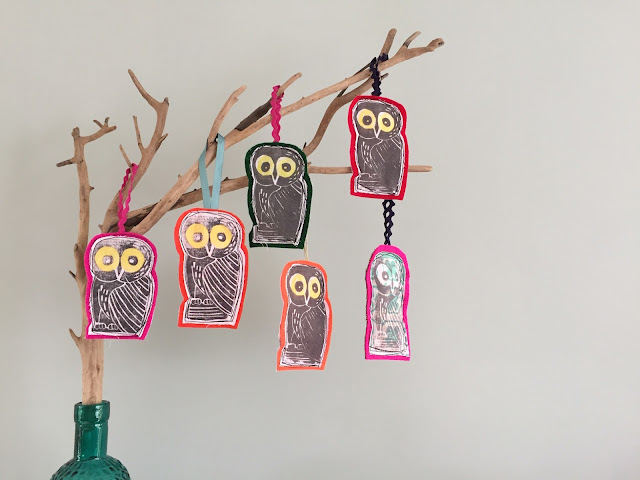 I had planned to share a lot more before we actually got into 'Launch Week', yet there’s been so much to do that suddenly I’m running out of time. Taking product photos, making short animations and creating listings is a L-O-N-G job…

Thank YOU for being with me along the way.

I am slowly getting through all of my tasks [alongside my part-time job] and I’m actually rather enjoying it. Some are small satisfactions such as FINALLY being able to use the lovely piece of branch I picked up years ago, because as a prop, it's perfect for hanging owls from! [see below].

But this has meant that some things haven't happened yet, such as the emotive piece that I'm writing to describe what inspired me about the Isle of Portland and how this translated into the collection I'm sharing with you. Actually - I'll tell you a bit right now. It doesn't have to be a long winded essay does it? I wanted to evoke the feeling of the place, but I'm guessing that you'd like it short and snappy - you're busy and you can always read a longer piece later...

So, here we go - The Isle of Portland is an intriguing place that has been quarried since Roman times. Portland Stone, a type of limestone, can be admired on the United Nations HQ in New York, St. Paul's Cathedral in London and the big shop in central Bristol that looks like a ship [now a Primark].

Due to the amount of quarries, most of Portland isn't actually there!  The marks left on the landscape, which would have originally been made by hand using a chisel and hammer, made me think of the marks made when creating a linocut print. That was the first spark. Add to that the fact that before starting this project I'd decided that, where possible, I'd use the tools, art materials and fabrics that I already had. This was another element to the Island theme as a lot of Island life is about using what you have to hand and making and mending. That's where this collection began.

I'm still beavering away with putting everything together for Thursday and everything will be 'live' from 12.00am in my Folksy Shop for you to see first, as promised.

OK, back to my listings and see you again soon!!

Note to self - next time I start a launch, at least I'll have a better idea of how much time I'll really need! I have another 13 Islands to go after this one...

About the UK Islands Project 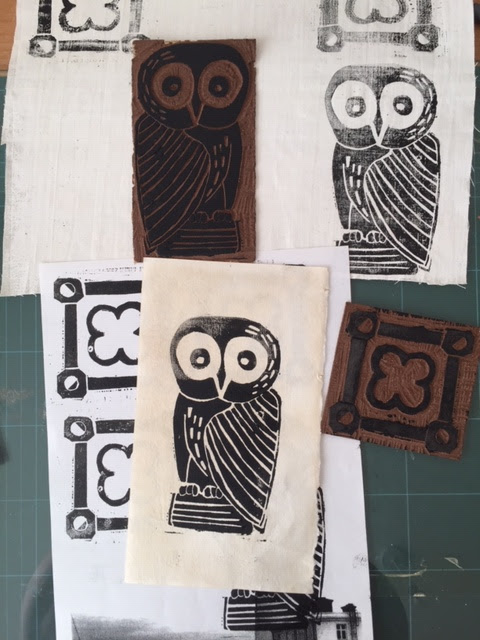 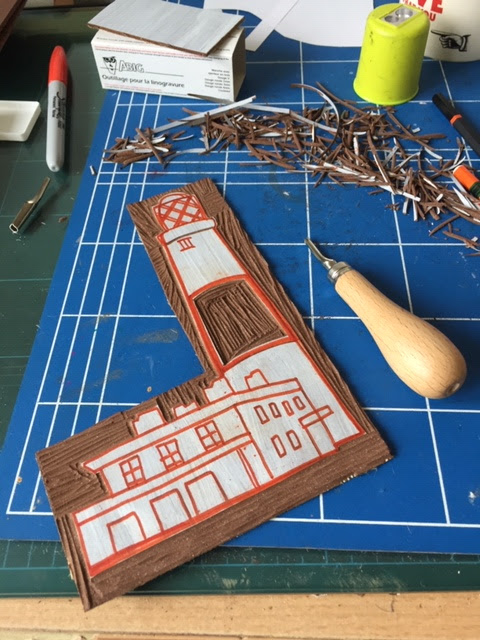 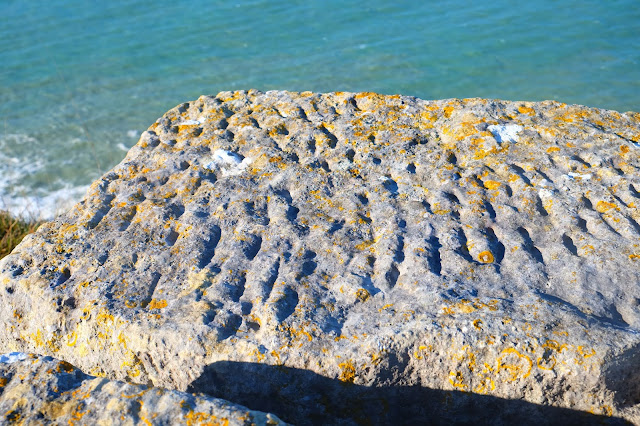 The marks left on the Portland landscape reminded me of the way linocuts are made, and became the basis of my collection inspired by the Isle of Portland.

Posted by Morwhenna - Creative Adventurer at Tuesday, October 13, 2020 No comments:

Launching my first ever collection - What if nothing sells? 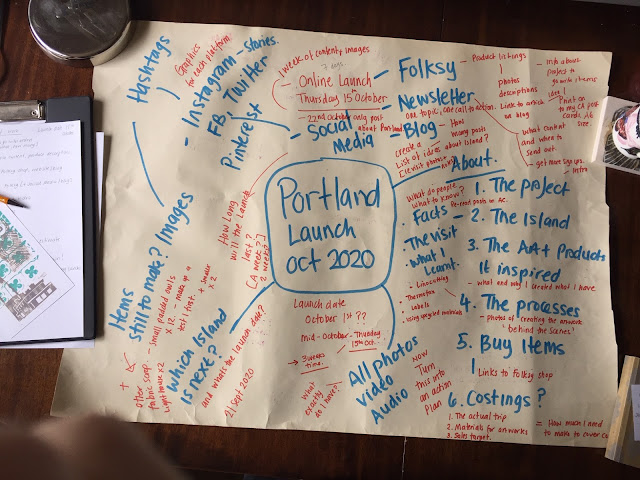 I've some news on The UK Islands Project!! I’m going to be launching my first ever inspired-by-islands-artwork collection on the 15th October! Whoop Whoop!

My original plan for this project has changed.  I’d been tightly holding on to the idea that I’d wait until I’d finished all of the artwork and items created inspired by ALL of the islands visited as one exhibition. I'd created this big, sparkly image in my head of how it'd be, BUT, I think that's been stopping me from actually getting close to it. I think that it got too big, and too scary! I've been giving this some thought and in the current situation, I’ve decided to change my vision.My NEW vision, and the one I'm actually going to be doing, is to release the Island exhibitions one-by-one online. I'd created a series of artworks and creations inspired by The Isle of Portland - the first Island I visited, that were pretty much ready to go and thought with a few other things to finish I'll be able to get this all up and running in no time! Then *reality check* I sat down and created a mind map [see above] and listed out ALL THE TASKS and realised there’s a lot more involved in launching an online collection!  If you've ever launched anything yourself, then you'll already be aware of this, but if not, listing online means photo shoots, writing product descriptions, taking measurements of each item, and I've even gone as far as creating some ‘Certificates of Authenticity’..!I'll be sharing the process with you over the next few weeks and hope you'll find it interesting and useful.
Worst-case scenario - I don’t sell anything.
Having thought of this, I felt better and it lifted the pressure. Of course, I hope that doesn’t happen and that I have created a collection that is appealing, interesting and that tells a story that you'll would like a piece of. But if it does happen, then that’s a lesson in itself!!You never really know what's going to happen unless you actually DO THE THING, and often, as I'm sure you can attest to, things often work out differently to how you'd imagined. So I'm going ahead and embracing whatever unfolds - however that might look and wherever that may take me, and if I'm honest that's part of the fun isn't it? The seemingly random unknowns that ONLY come about because of one step that we've taken. Here I am taking that step. Or maybe more of a leap!Is there something that you've been working on or would like to work on but are feeling the fear a bit? Figure out what you single small next step is and do that. If you need some help figuring out what that step is - drop me a line and I'll do my best to help you.In my next blog posts, I’ll share what I discovered on the Isle of Portland, what it inspired me to create, and why, plus some behind the scenes processes. We still might not be able to physically travel far at the moment – but we can travel in our imaginations and plan future creative adventures when we’re freer to roam and ramble.
If there's anything you'd like to know about this first island - or this whole project - please ask!
And if you'd like to be the amongst the first to see the full collection and have an opportunity to buy from the collection before it's showcased on social media - sign up to my newsletter as I'm sending all details to by lovely subscribers first.
See you again soon!Morwhenna
xx
Sneak peek of some of the collection inspired by The Isle of Portland 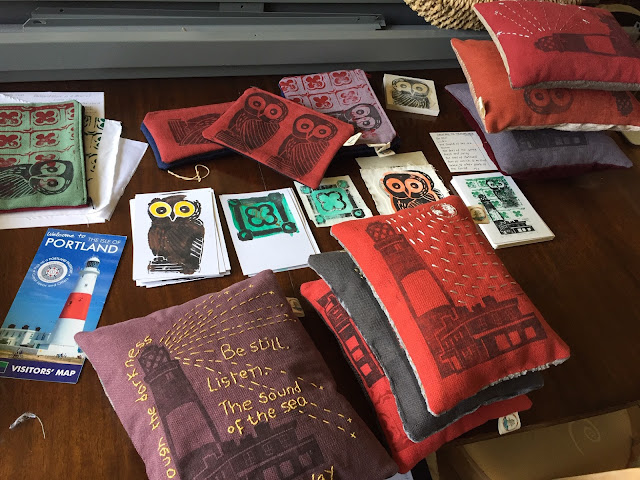 Posted by Morwhenna - Creative Adventurer at Friday, October 02, 2020 No comments: