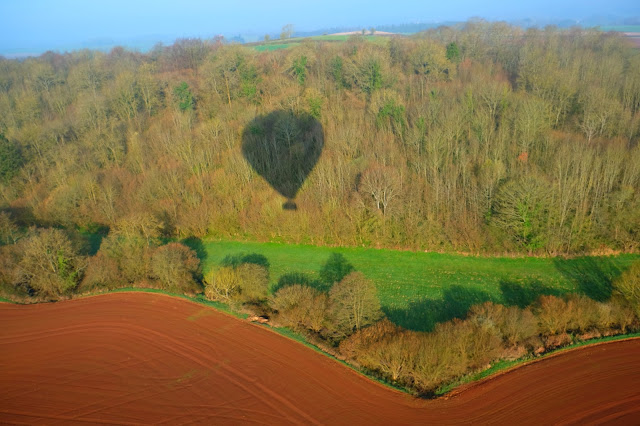 There are a few of my 40/40 project experiences that I’ve not written about yet for one reason or another, one of them being going up in a hot air balloon. It was the most amazing experience and I absolutely loved it! Going up in a balloon is something I've wanted to do ever since I went to Egypt as a student. At the time I couldn't afford to take that trip...so going up in a balloon has been on my wish list for many, many years.

This wish was becoming a reality. Whhooooo Hoooooo! 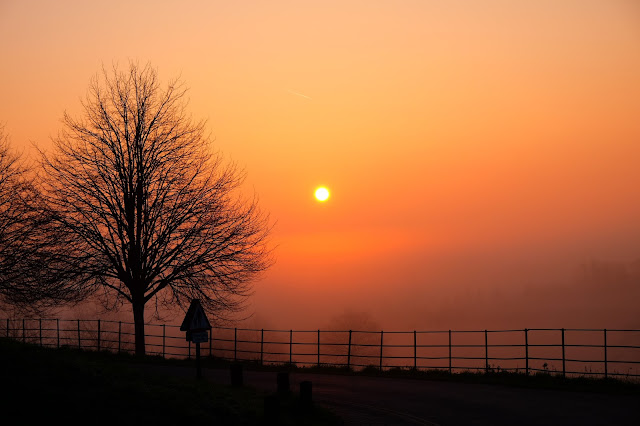 The first flight was booked for March, however the weather wasn’t playing ball so we had to reschedule. I’d been given the balloon flight as a 40th birthday gift from some of my family and Mr CA was able to join me as Bristol Balloons were running a 'Plus 1' offer at the time. Fabulous! Cerys Puppy and Timmy Cat had to stay at home though...

April came around and with it our second chance at a flight. Fingers were crossed. It was an early start – up and out before the sun on a frosty and misty morning.

We assembled at Aston Court to see if today was a good day to fly.

The test balloon was released. (A standard black party balloon to see which way the wind was heading - very technical!)

Ah the wind would send us towards Bristol Airport...

Not so good. We were all bundled into the land rovers that were pulling the hot air balloon kit and taken to Keynsham Rugby ground instead, hoping we’d be able to launch from here...

The all clear was given and the balloons unpacked. I’ve been to the Balloon Fiesta in Bristol before but have never been as close to a balloon as this and really appreciated just how massive they are!

Everyone who was taking a flight was roped in to help unpack the balloon which was good fun and rather hard work as the balloon is surprising heavy. 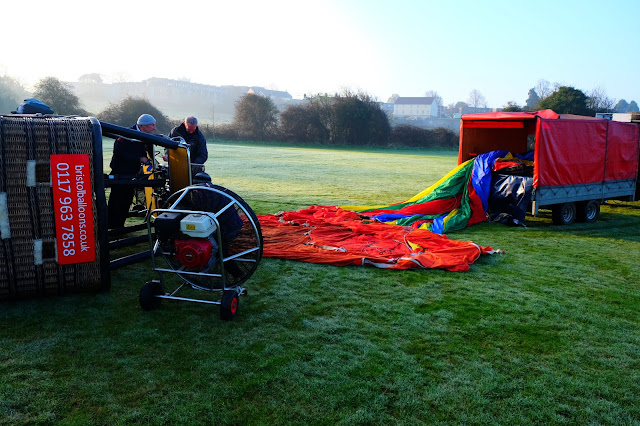 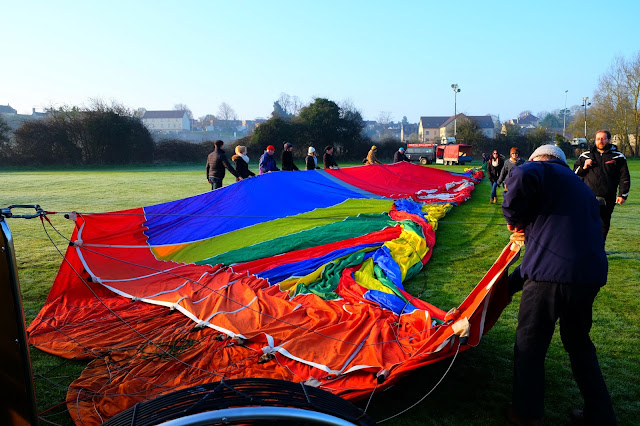 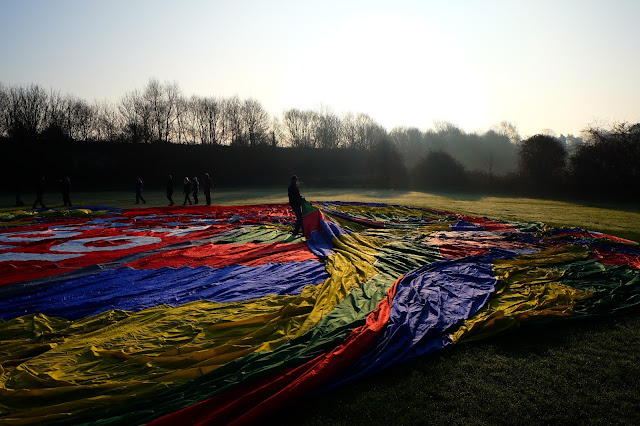 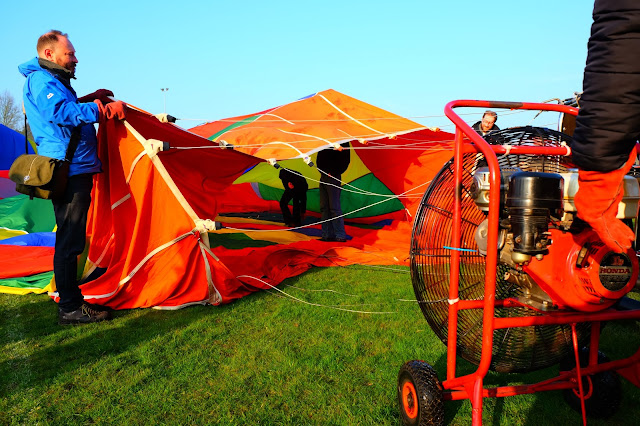 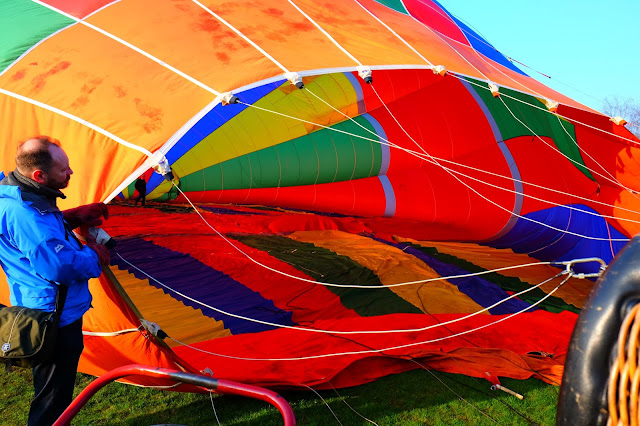 The moment finally came when we were to climb aboard and set off….

Once in the basket (it's split into four compartments around a central core where the pilot stands to control the gas) we were told to sit down on the benches and hold on to the ropes as we took off.

All of a sudden we were lifting off the ground and going up, up, up...

I felt surprisingly safe being in a basket supported by a balloon made of fabric…!

As we rose up slowly the sounds from below changed and even though you could hear quite a lot the stillness of being above it all gave the sounds a different quality.

As we drifted along the view around us was breathtaking. It was a beautiful day to fly. 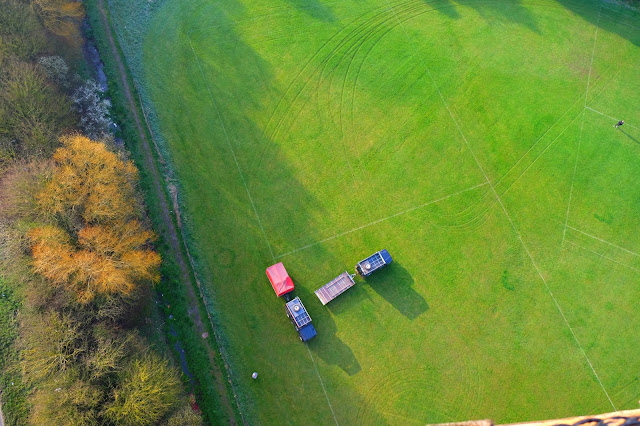 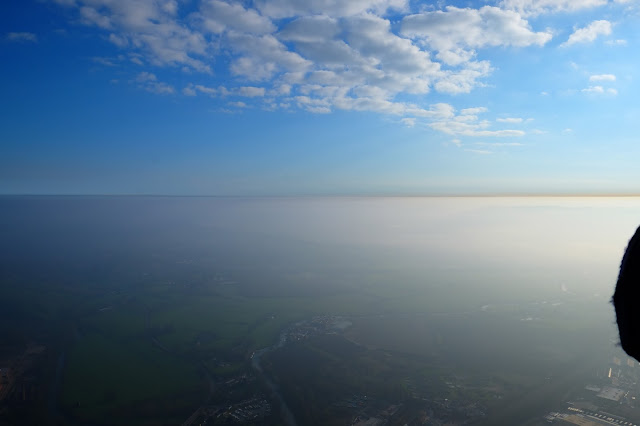 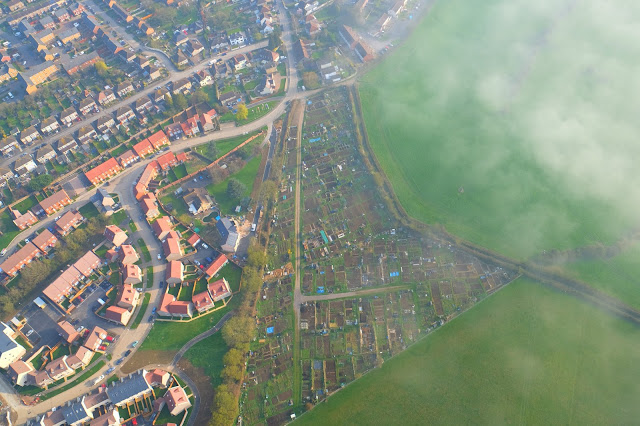 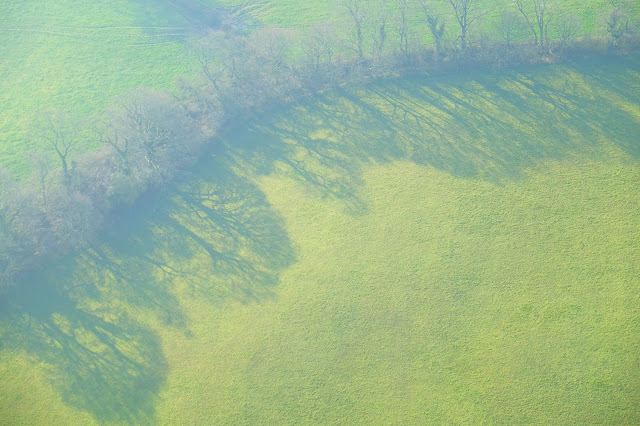 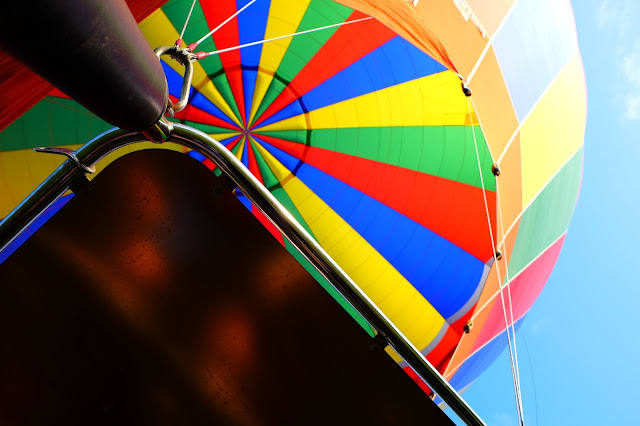 Looking down at the landscape beneath us, it took on a new perspective and all the different patterns made by nature, animals and us humans created an artwork all of it’s own. The shadows from the trees creating delicate lace patterns on the ground.

I really saw a different kind of beauty from this view point.

There were so many amazing patterns to see from this perspective.  It was fascinating.
It exceeded any thoughts I’d had about ‘what will it be like’ it was pure joy, magic, wonder and excitement. 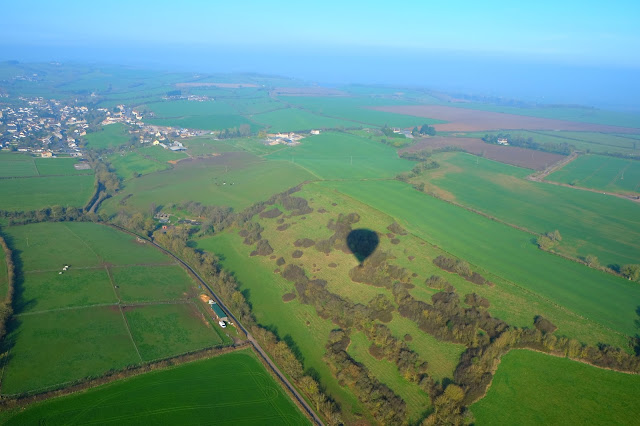 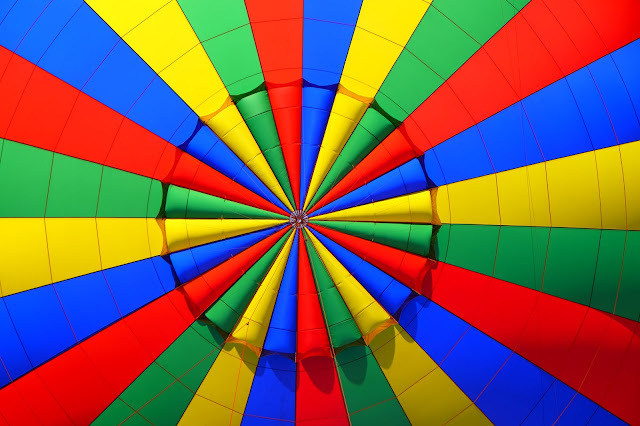 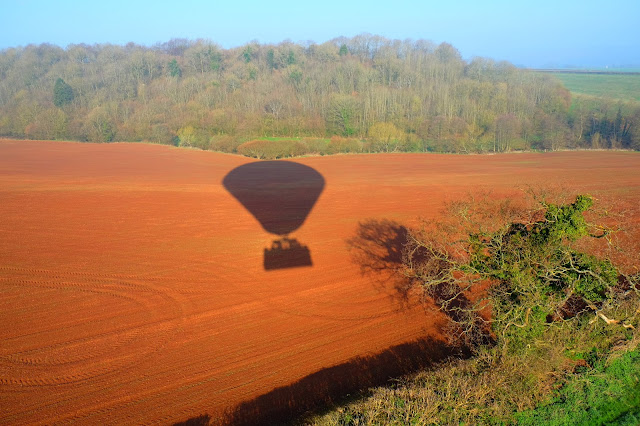 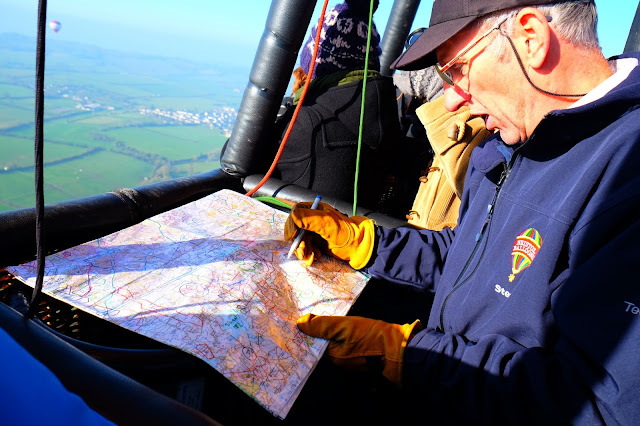 All too soon it was time to land and we were heading over a farmers field so our pilot radioed to the ground team to secure our landing site. Apparently the team usually carry a couple of bottles of ‘something’ to give any farmer whose field their balloons land in as a thank you.

The landing was a quick bump, skid and tumble…It was rather exciting to be honest. 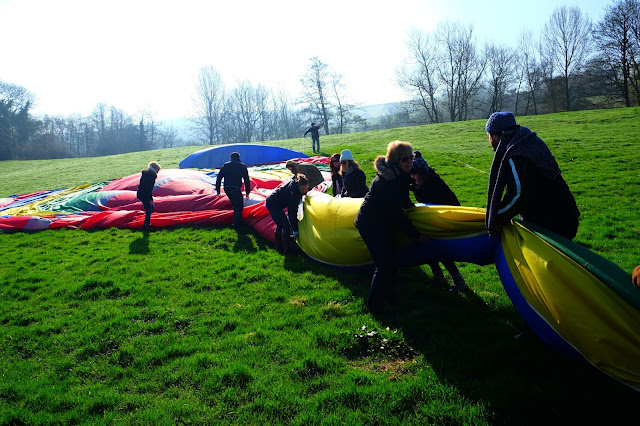 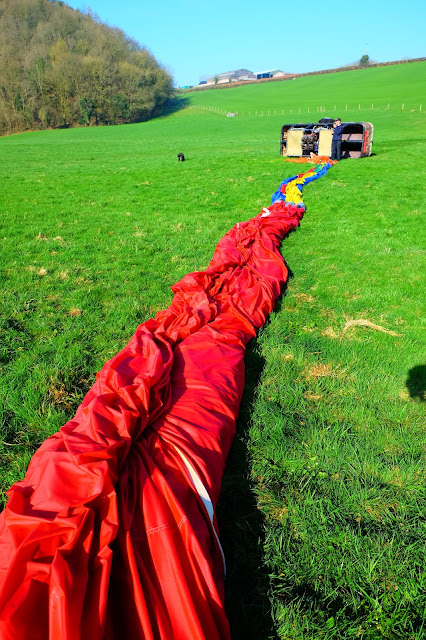 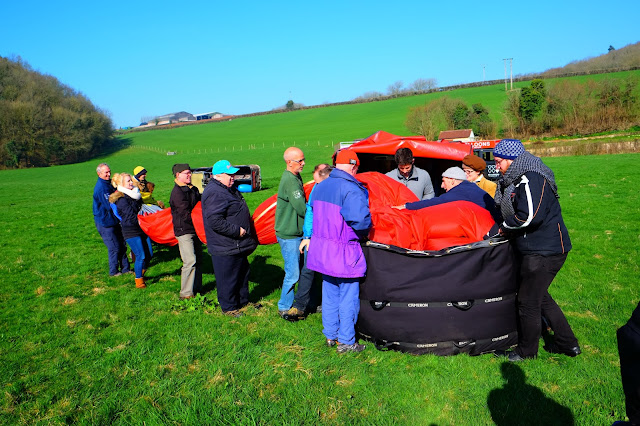 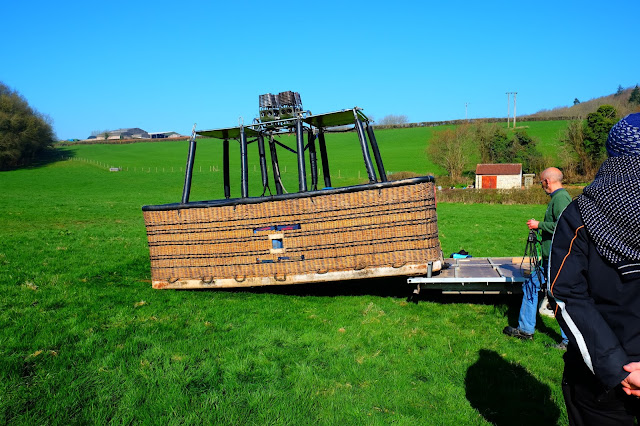 And a couple of photos taken by Bristol Balloons! 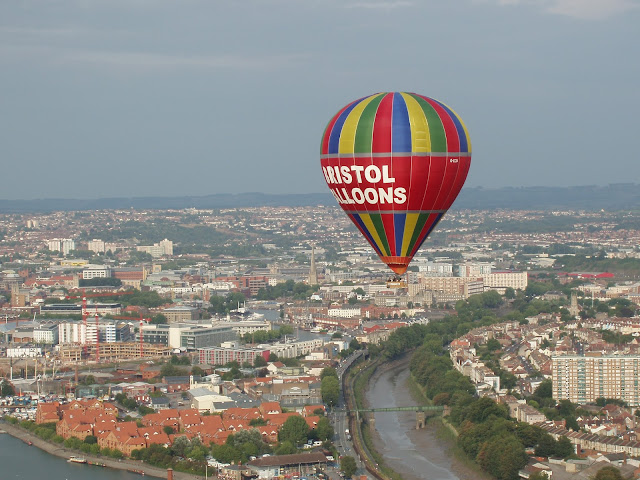 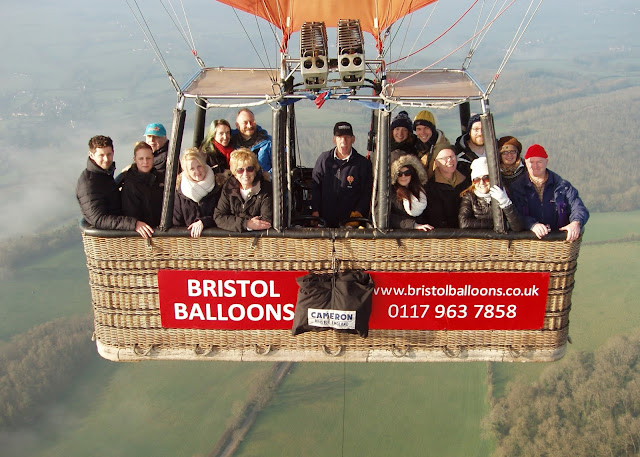 There we are on the left at the back! It does look like 'That's not real that's superimposed' but trust me - we were there! And do you see the gas taps - they rather look like cyber men to me...What do you think?

And Yes I’d LOVE to do it again!

Have you been in a Hot air balloon? Would you like to? It really is superbly wonderous!

Tell me, do you have a wish list/bucket list or some kind of list of dreams like my 40/40 project? I'd love to hear what they are and if I can help you to achieve any of them by coaching you!

Happy New Year – New You (Again?) Ditch That and Do Something Different.

Here we are at the start of a new year. All those delicious new days and opportunities yet to be experienced. Tell me, what do you normally do at this time of year?  Have you set yourself resolutions – that secretly you know you’ll never stick to as you’ve gotten so excited by the New Year you’ve set yourself WAAY too many? Or have you abandoned that practice now and take a different approach? Choosing to learn a new skill? I’d love to hear what your ritual is if you have one.

Me, well I’ve been reflecting on 2015 and starting to think about this year and what things I’d like to focus on and complete. I’ll be revisiting unfinished projects with a view of getting things finished this year. One will be finally converting the fleece from my ‘Love What You Wear’project (I’ve bought some carders) and learning to spin that into wool so by the end of the year I’ll have made something from the fleece! Hurrah!

I’m also going to be researching my Family Tree. Two things have sparked this.


My word for 2016 is Family. The majority of my Family are in Cornwall and I’m ashamed to say that I don’t see them that often. This year though I want to change that and spend more time with my family as well as meeting extended family I’ve not met before. I’ve already discovered I have some in Bristol which I wasn’t aware of!! (shocking I know!) It’s a long story and I’m sure snippets will make it into these posts as I go on this exploration and journey.

Have you done any Family Tree research? If so, what have you discovered? Did anything surprise you? And I’m curious - does knowing more about your ancestry change how you feel about yourself?

Or maybe you’ve been thinking about doing some research for a while but have never quite gotten started. How about this year? I know some people have told me it can become rather addictive and time consuming and I think that actually puts a lot of people off. I’m only planning on doing and hour or so a month and using the local Library – as there you can get free access to Ancestry.co.uk which has pretty much ALL the records you need online (I believe!) so you don’t need to go haring across the country anymore to find out details. Bitesize. This is the way I’m going!

As I’m sure you’d expect there are other plans in the pipeline. Of course I’m also going to be continuing to work my way through my 40/40 list and get some more of those completed. Hmmm seems Completion is also a key word for me this year.

I’ll leave you now to consider what things you’d like to focus on this year and hope that I’ll be able to support you in some way or other. Do drop me a note and share what you are dreaming of creating in 2016. I love hearing from you!