Love What You Wear 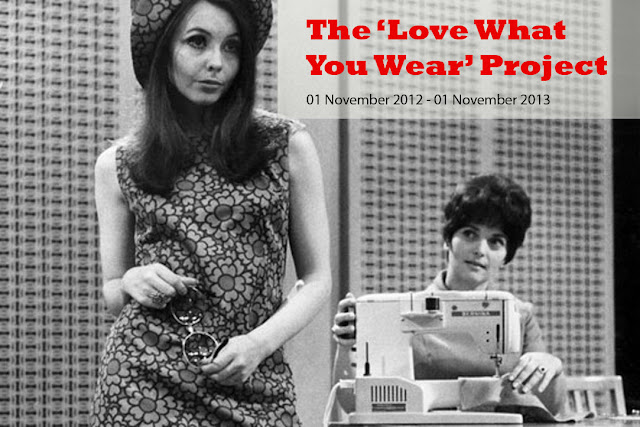 From the 01 November 2012 - 01 November 2013 I won't be buying any new clothes (with the exception of shoes and undergarments!) When I need something - I'll either make it from scratch or re-purpose vintage/charity shop finds. Why not come and join me and take part too?

It would be fab if you'd like to take part too! Or if you have some fabric kicking about the house you no longer want or any other bits and bobs like buttons etc and would like to donate them -  give me a shout!

Why am I doing this?

I've always had a love of making things and a few years ago had a dressmakers dummy for Christmas. I had visions of me making lots of beautiful dresses (which I would swan about in...!!). Truth is - I've not made one! I also have some fabric ready and waiting to be made into 'something' but I've been to scared to cut up that fabric, 'have a go' and make something to actually wear!  But that's only part of it...

Since setting up my business using upcycled materials, those visits to the textile recyclers re-ignited my interest in clothes and the possibility of making my own.  Seeing mountains of textiles being sorted and then being shipped off to other countries (now I'm not saying this is a bad thing at all - far from it. It's brilliant that it is being given a second life, as sadly lots of textiles do end up in landfill). It just made me think more about what I had I my wardrobe and what I wasn't wearing for one reason or another.

This also made me think again about the clothes I was buying and where they came from. I've been trying my best to by organic, ethical etc where and when I can but it's not always easy and you actively have to hunt for it.  I know this is improving though!

I'd also been inspired after reading 'Through The Eye of the Needle' by John Paul-Flintoff a few years ago as well as numerous 'make your own' type books.

So I'd been thinking on this idea for a while - and thought - why not just go for it! So here we are!


This project will evolve I'm sure. I'd really like to work with and meet as many people as possible over the coming year.

Be it highlighting charities who are doing amazing work in changing the poor conditions of garment workers - and this can be in the UK as well as further afield..to people who are doing something similar to me and this project as well as change-makers in their own way - I would love to hear about you and what you are doing!

There are so many things I can't wait to have a go at - I'd like to try using natural dyes and maybe even finding some sheep/alpacas/goats/other furry type animals and going the whole hog (so to speak! - just like Kevin McCloud and his new dressing gown! - see Kevin McCloud's Man-made home Series 1 - Episode 4) to getting some wool!

Who knows where this project will take me. But the idea of it is all rather exciting!!

So, personally - It's really more than just being about clothes. It's about the community of people involved and who I'll meet along the way. And if you are taking part too - who you'll meet, as we'll all have a different experience. ;-)

I hope that by doing this project it will encourage more people to think about their clothes, where they come from, who's made them (if not themselves) and to take that extra bit of care when buying something.

And ultimately to really Love What You Wear!

Other than that - I'm really hoping I'll be able to make at least one beautiful dress that I'll feel proud to wear!! (and to meet some really nice people).

I've setup a stand alone blog to chart the progress here so pop on over!