On seeing things through

It’s been a long time since I’ve written to you and, like many people, I’ve been struggling. I’ve been struggling with life really and with how our current world and society is panning out. Most of the time I’m asking why is this happening and how can that be allowed to happen [I have written to my MP], and for the most part, I have felt heavily weighed down by it all. I have felt unmotivated, despondent and deeply apathetic.

I’d somehow forgotten ALL the things that actually helped to support me, and I had forgotten how to do these things, which is weird! It seems to be a fault of being human, that even though we KNOW what’s good for us, we don’t do it. Or we do the opposite and then wonder why we feel s*hitty.

It’s definitely something that I’m getting curious about again and asking myself ‘why’ and then really, I mean really listening to the answers that pop up. It can be surprising, painful [sometimes] but always illuminating. Bear with me, though – I promise things have taken a turn for the better and I have made a commitment to myself that what I can do is to see through my creative projects, no matter what. The good, the bad and the ugly!

You might have guessed that I’m talking about my long-standing UK Islands project that I started in 2017. I have felt shame about it taking so long and for one reason or another not being able to finish it, and beating myself up about why can’t I just do it? It’s not really that hard! Well, until you overthink things, or get distracted or lose motivation, or wonder why you are doing it in the first place, but I KNOW deep down how important completing this project is for Me, and really that’s the only person I need to impress. Yes, of course I want you and everyone to like it and for it to generate complimentary comments – but actually by not doing it, the only person who’s really missing out and suffering is me. [Have you got a creative project that you're working on, or would like to be working on, and can resonate with this?]

So, I am saying it here – I am seeing it through, no matter what, to the end.

Yes, I am working on this becoming a book and I have publishers to pitch to, so I'm figuring out how to go about this…

Yes, I have big ideas of how I would like the films to look that have been bubbling away in my imagination for the past few years, I have accepted that they might not turn out exactly like that, and Yes, some of what I create and produce might start out a bit rubbish, but actually, I can’t know how to improve on that unless I actually make a start and DO IT! All nothing new here – but something I’ve had to strongly remind myself of.

So in the spirit of diving-in, earlier this week I filmed my first proper ‘UK Islands Project’ talking to camera and everything update. And I shared it on YouTube, and in the process of doing that I discovered something unexpected and hilarious that has had me laughing ever since.

I couldn’t figure out how to get YouTube to create automatic captions for my video [I’m sure it’s done that before] so I used some software to transcribe the audio. The software didn’t quite interpret what I said correctly, so I had to make some corrections – for example Looe Island to the software was either Lulu or Blue island – so I corrected those plus a few other minor corrections, but one, ONE was just too funny not to leave exactly as it was. I’ve included a screenshot below – can you spot it? Or if you’d like to watch my first ‘talking to camera project update’ you can watch that and turn CC on to look out for the funny caption. I hope you enjoy the film. 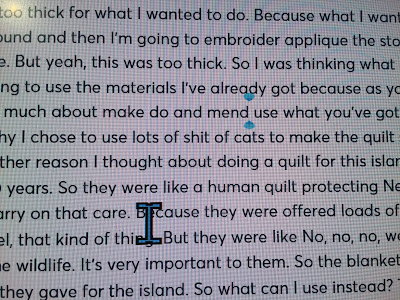 This small thing reminded me just how much I love the random fun that does happen when developing creative work. And that’s actually one of the things I love about creating – those totally 'random', 'unexpected' things that happen as a result of taking action.

That’s it for now, as I am really reconnecting with you after a long time, I do hope that you'll join me on completing this creative adventure. I will be in touch with you more often as I work on this project.  Take care and see you soon!

PS, if you want to know when the next update is live on YouTube, best to subscribe to my channel as I’ll be uploading there first.

Happy Adventuring and to seeing things through.
Morwhenna
xx

Posted by Morwhenna - Creative Adventurer at Thursday, September 29, 2022 No comments: